CAcert has embarked on an interim project to re-sign the Class 3 root. The project is inspired by the Mozilla announcement of Dates for Phasing out MD5-based signatures and 1024-bit moduli. Community members from the Software-Assessment Project team and Critical System Administrators team rose to the challenge to prepare, test and implement a class3 re-sign procedure. 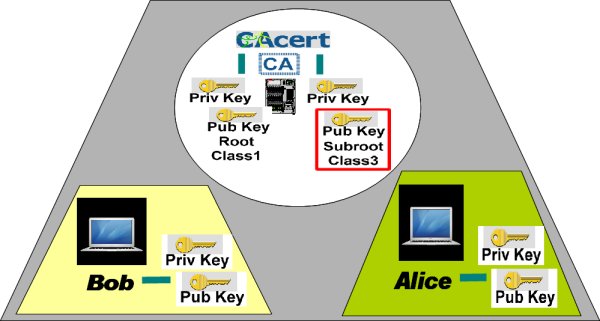 CAcert is going to re-sign its Class 3-certificate on June xxth with a new SHA256-based signature. The MD5-based signature on the old certificate is seen as not secure any more by Mozilla and is therefore deprecated. Mozilla is going to drop support for MD5-signed Class 3-subroot and end-entity certificates after 30th June. Users of Mozilla products such as Firefox and Thunderbird may experience errors when these programs try to verify such certificates.

In order to avoid warnings, webmasters and users of CAcert's Class 3-certificates will have to download and install the newly-signed certificates from CAcert's website www.cacert.org. The same procedure applies if the Class 3-certificate is used for secure e-mail communication, for code signing, or document signing.

The procedure in short:

By using the safe SHA256-hash CAcert is focussing on securing the internet on a continuing basis. Further information is given on CAcert's Wiki page https://wiki.cacert.org/FAQ/Class3Resign.

Q: Do I have to recreate my class3 certificates ?

Q: My email partner receives a notification that my class3 cert produces an error

Q: Do my email partners receives a notification too if I have a class1 issued cert ?

Q: I have a server cert issued by the CAcert Root as a Class 1. Am I affected ?

Q: I have only installed a class3 issued server cert. Am I affected ?

Q: I run a website with one of these class3 certificates. How can I help my users over the transition?

Q: Why don't you update Class 1-certificate that is also signed using MD5 as well while you're at it?

Q: Why can the root CAcert certificate (class 1) still be signed using the MD5 algorithm?

The safest way to avoid problems is to replace old root certificates with new ones: